It’s been a long time since my last update!  There were two fun trips in the interim (Veracruz Carnaval and Calakmul), and I have done some work since then.

There was quite a bit of detail work.  If I just have to insert a few tiles it isn’t worth mixing up a batch of cement, so I’m using the No Mas Clavos adhesive again.  GREAT stuff!  But would cost a fortune to do the whole wall that way. 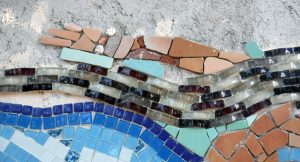 Several people commented that her right arm (that extends backwards under her hair) looked too short. I agonized over this for a while and decided they were right. You can see a couple of tiles just to the right of her shell bracelet; that extra two inches makes a big difference.

I got a birthday gift–a box of golden-orange square glass tiles left over from a remodeling project. It occurred to me that they might make a nice edging for the sand sea-bottom area, so I’ve placed just a few of them onto the wall to get an idea how it might look.

But the big addition today is ocean tile.  A few days ago, I found tiles to fit right around her tail and taped those on the wall (meaning–no racing against time as the cement sets in the bucket). 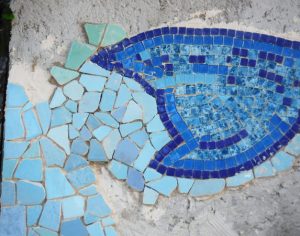 Then today, I mixed up cement and attached all of those to the wall around her tail.  And then–the big unknown–I had to find tiles to fill in the gap between that “outline” row and what was already on the wall, where I’ve been working in from the edges.

You can see the results here. That “end of the tail” area is about the most complicated on the whole wall, and it required a lot of small tiles to make things fit.

I think that works.  But I’ve also discovered that I have nowhere near enough blue tile, unless there’s more buried in boxes that I forgot about or filtered out in my first sorting (a year ago!).  If I don’t find any more blue, I may have to put out a request to the local Facebook group to see if anyone has any unused ones lying around.

So here she is, as of the end of the day: