Remember when every day (back the end of March) my post was nothing more than “More blue tile”?

That’s about where we are now with the green.  I should have lots of material to finish the ocean, in several different shades of green (but especially that Plain Old Pastel Green).  Some folks even surprised me by bringing some over yesterday!  I’m in fine shape. 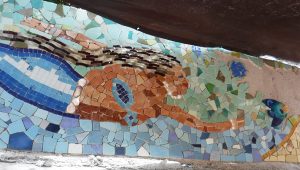 So the last several days have been the same slow process of finding a tile that almost fits a place, chipping and grinding it, and taping it up.  Then once a day, mixing up the cement and sticking them all on the wall.  The above photo is the recent work as of 12 Noon today–notice that the entire area above her is now completely filled in!

But there was one unique little project this morning.  At the gift shop of the Alhambra in Granada, Spain, we bought a little coaster made from six pieces of ceramic tile, molded and arranged into a pattern actually found on some of the walls there.  I taped the faces all together and then stripped off the piece of felt that was holding them into shape.

I was going to put it on the wall and then get tiles to fit around it, but realized that would take forever and with questionable success.  Instead, I laid it on the table and fit tiles all around it.  No climbing up and down the ladder!  The whole thing took about a half hour. 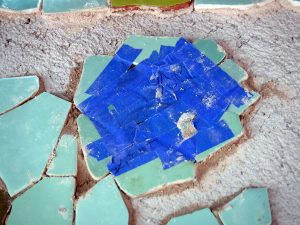 After taping it all together so it could be handled as one piece (just as I did five months ago with Sirena’s body), I cemented it in place as you see here. 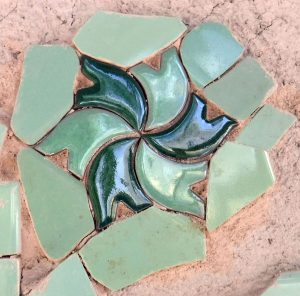 The tape is off and you can see the pattern!

Next page:  13 June–More green (and some yellow)