Amazing what a 3-hour hard push will do.  I started around 10:00AM; by 1:00PM all the blue, green, and Sirena herself, was DONE.  There is still detail work to do, which I’ll show you at the end of this post; but for now, it is a HUGE day in the life of this project! 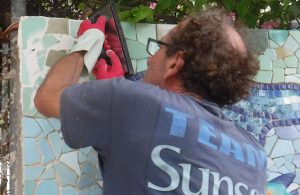 Here’s how I started.  After mixing maybe 1/3 of the 5kg bag; I’m using the float to spread the grout over the tile, pressing it into the cracks.

I can tell you right away, this is NOT the same as doing a tile wall or floor where all the tiles are square and the same thickness!  I had to slide the float in all directions or it would miss whole joints where a thick tile would hold the float out away from a thin one. 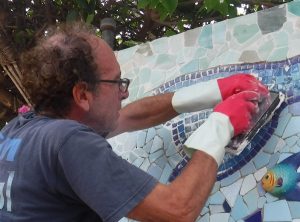 But the good (great, really) news is that instead of the grout bringing out all my irregularities in thickness and spacing between the tiles, it ended up masking nearly all of them!  Even the glass tiles, many of which have no gap between them at all,ended up with a very nice white grout line around them. 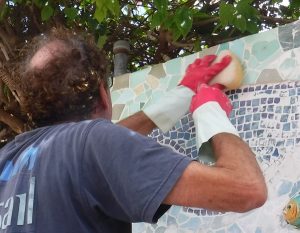 You really have to work fast, and nonstop.  I took about a half hour to use up all the grout in the bucket. Then immediately starts the process of using the sponge to scrub off the excess.

The sponge has a scrubby side and a spongy side.  It takes serious elbow grease to get the excess off!  (Sometimes I cheated and used a fingertip.)  And here was the second really great news: even with the hard scrubbing, NONE of the tiles broke off the wall.  I’m amazed… 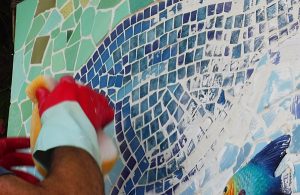 Here you can see a second wipedown of the glass tiles on the tail.  I had to stop about every minute to rinse the sponge with the hose and nozzle.  A big Home Depot orange bucket was my “sink.”

A second bucket of grout and 2 more hours, and she’s done!  Here is how La Sirena looks after grouting, the sponge scrubbing, and then a light wipe with a dry towel to take off the haze:

BUT she is not quite done yet.  Obviously the yellow ocean bottom isn’t done yet.  But there is some important detail work to do. The grout will have to be applied using a bag that’s just like what a cake decorator fills with frosting to write and make designs.  I’ll use it to fill in

around the fish and Sirena’s hair: 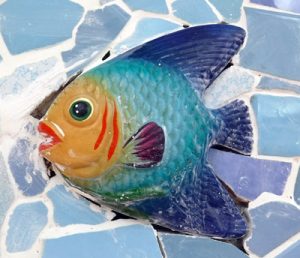 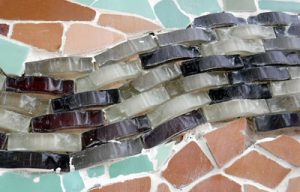 and the seashell bracelets and necklace have their own issues.  They are buried way to deep for me to grout around them.  I think the best thing to do, since I have an unlimited supply of shells, is to just glue a near-identical shell right to the top of each one.  That should bring them up to the level of the tiles, and then I can grout around them.

(UPDATE 23 June: that is exactly what I did, and I think the grouting will go fine.) 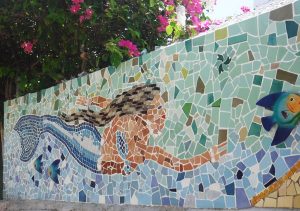 SO, Wow… this grouting day went spectularly well; far better than I ever thought it would.  I can finally say:  she looks GREAT.  Here’s one more look, from the right end of the wall:

Next page:  28 June–Building the Sea Floor