On 30 April 2017, I downloaded some mermaid images off the Web.  I’m calling that the official start date of the La Sirena project.

There was an initial flurry of work in May and June of last year.  I did the design, printed it out full-size and spread it out on three long tables.  All of Sirena was laid out on top of the design, and I even put up a few tiles (the ones in the far lower left corner).   Then we started traveling and did a lot of construction work on the house, so the next six months the project was on hiatus.  It all restarted in January of this year, and this blog went online soon after.

La Sirena is a bit larger than planned; about 30 inches high (it varies since there is no such thing as a straight line in Mexican construction) and 13’10” long.  A fast calculation says there are more than 2,000 tiles up there (maybe I’ll count them one day).

Today started with grouting all the seafloor.  This was much harder than the ocean end of the project, because of all the shells. I could not use the grout float on much of the area without getting grout all over them, so I ended up using a ScotchBrite sponge for a lot of it. 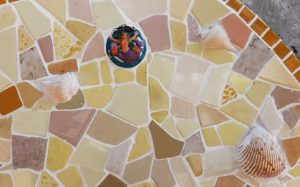 This photo shows what I mean; the shells were about a foot apart or less.  You can also see the little “surprise” I mentioned on the Last Tile post; I inserted a mermaid pendant which was made and given to us a few years ago by our friend and mermaid enthusiast Pat Scott.  (Thanks, Pat!)

After grouting the seafloor, I got to work with the Grouting Bag filling in the crevices that I couldn’t get at with the float.  The bag is a large version of a cake decorator’s frosting bag and works the same way. 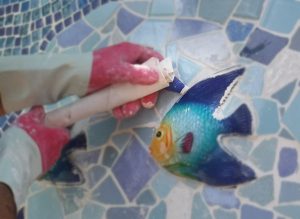 In this photo you can see the blue nozzle at the end of the rolled-up bag.  I’m squeezing the grout into the empty spaces around the fish.

I’m glad I only mixed up a little grout for my first try at this.  The bag was way too big and so was the nozzle.

Over lunch I looked on the Web for some clues on how to improve the process.  (Note to self: do this before you start something new!)  I learned that these bags really aren’t made with mosaics in mind; they’re for things like stone walls that still have big gaps but aren’t suitable for the grout float.

I looked around for a way to make the hole smaller, and came up with a brass grommet. Glued it in with hot glue and crossed my fingers that it wouldn’t be pushed out by the grout.

It worked!   That and cutting the bag down to about 2/3 it’s original size (so it was much easier to handle) made the rest of the detail work go very well.  There was a LOT of it: the pottery fish, Sirena’s shell necklace, belt and bracelets; around her hair, and around all those shells and the starfish.

And after the detail grouting was done, there was a lot of scrubbing to do.  Seems like excess grout was everywhere, and some of it was pretty tough to get off.  I’ll probably be seeing wayward bits for months; I’ll scrape them if they bother me.  (It’s amazing what you don’t see if you’re not really looking for it.) 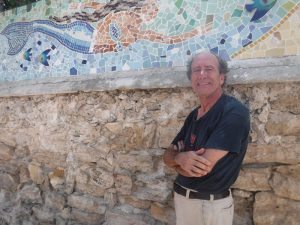 So that’s it!  By far the biggest art project I’ve ever done; one of the biggest projects of ANY kind, in fact.

Which brings me to the next big question:  What am I going to do tomorrow??

Next page:  Nope, we’re done!
(Unless I do a “lessons Learned” page, but I’ll think about that first.)