Not much to add the past couple of days; we’re now really focused on preparation for travel, so Sirena is not getting much attention.

The big work yesterday and today was this relatively small area of green tile.  As mentioned before, it can be several trips up and down the stepstool to fit each one.  Fortunately, the cementing in goes fast.

Lots of area filled in at the left, and the top row is almost complete all the way to the air bubbles coming up from her mouth.  Nearly all of those top-row tiles are only attached to the wall part-way up, so I have been packing finger-fulls of leftover cement behind each one a day or two after mounting them.  I’m hoping that will create a solid back for them.

Here she is as of this afternoon:

You can see all the area still to be filled in out front of her to where the beach rises.  But here on the table is ALL the green I have left.

Tomorrow we will probably head into Merida and I’ll try to buy some more, hopefully in some different shades and especially in pastels.  Hope springs eternal!

Next page: 17 April–Too much distraction?

Six days since the last post!  A few slack days in there, and some just adding more tile.  As of noon today, here’s Sirena:

You can see more green tiles are up, but it’s going very slowly–all those trips up and down the stepstool really do slow me down.  At this point we’ve given up the self-imposed deadline of April 20 (when we leave for five weeks) and that takes the pressure off. 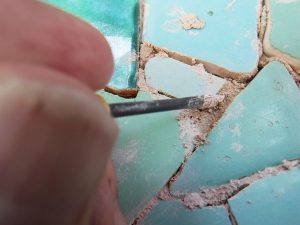 I realized I’ve never posted a photo of one very tedious part of this process.  Practically every single tile has excess cement that has oozed out the edges, and we don’t want any of that to show; there always has to be enough depth for the grout to fill up.

So when I’m not doing something else, I go out to La Sirena with my little picking tool (actually a soldering thingie that came with my Radio Shack soldering iron) and scrape out the excess.  It comes out pretty easily (hopefully that doesn’t mean the adhesion is weak as well) and looks a lot better when it’s done.

Possibly some more work later this afternoon!  But in the meantime…

We’re full-bore on GREEN now!  I may still drop a few blue tiles in at the transition behind the large fish, but I’m basically into the whole “above Sirena” green part of the ocean. 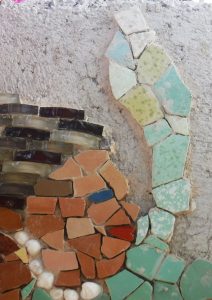 I did have some special fun this afternoon.

For weeks, you’ve seen a couple of tiles taped out in front of her mouth.  Those are little “bubble” tiles; they have a bubbly pattern in the glaze.

I’ve been hoping to have enough of those tiles to create a column of bubbles all the way to the surface, and today I decided to track them down.  There was a lot of blue masking tape used to get those to stay up there, but amazingly little cutting and grinding to make them fit together!  I figured the tape could easily give way overnight, so I mixed up a batch of cement and stuck them up there. 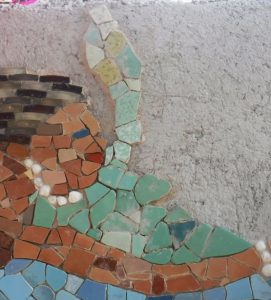 I did some work in the area above her arm too.  That’s filling in pretty nicely.

The other task today was continuing to do the top row.  This time I was smarter; rather than go up and down the ladder trying to fit each tile, I laid out about a dozen of them on the table first, and then cemented them up all at once.  (That ONLY works for something like this top row, where I only have to match each tile to the ones on each end.)

So, here’s what La Sirena looks like at the end of the day, 4 April: 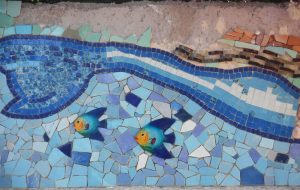 That whole big blue area under the curve in her tail is finally done.  Seems like forever since I started that!

I like the two fish in there, but they sure did not make the job any easier, since a lot more fitting had to be done.  Still, if you zoom in (use Ctrl + to do that, then Ctrl 0 (zero) to bring the screen back to normal), you’ll see they fit in there pretty well.

SO now the only blue left is way out on the right side!  Lots of cutting, grinding and blue tape today.

Next page:  4 April–Green and Bubbles 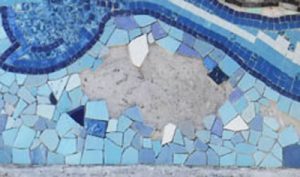 Whoa!  This morning I had the idea of putting something other than just tile in the large area under the bend in her tail.  It’s a LOT of blue, and with the tail being blue already… you get the idea.

The obvious idea was a fish, but that would be hard to make with the broken beach tile.  But–Great Idea–that kind of ceramic painted wall decoration is sold all over the place here in Progreso (we are a cruise ship port after all).

It did not take a lot of shopping to come up with a set of three ceramic painted angelfish (for about US$12), so we brought those home and tried them in different positions.

The two smaller ones looked the best in the under-tail area.  They fit in there nicely and they swim in the opposite direction from La Sirena.  (Detail photo below.)

But what to do with the third and largest one?  It took about a minute to decide to replace two starfish with the third angelfish, move one starfish to the beach area and just lose the second one.  The starfish should not have been out there swimming anyway, and the new fish gives Sirena a friend she’s following.  That area now looks like this:

At this moment in the midafternoon, you can see the three fish, the starfish, and a bunch of taped up tile that will finally completely enclose the area under the center of her body.  (That was actually the goal for today before all this other stuff started.)  I’ll go back out there when I’ve got some shade again.

AND LATER THAT SAME DAY:

Blue tape is off and a lot more tile in place… 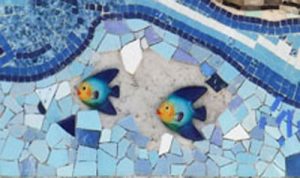 … including some right around the two small fish.  Compare this photo with that very first one at the top of the post.

MARCH 30–Just a couple of photos to add; not worth a whole new page… 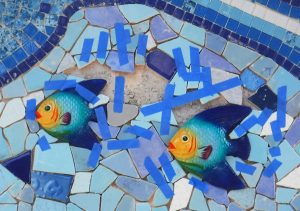 Taped up a lot more tiles along the bottom border and primarily in that under-tail area around the two fish.  Here’s what that looks like now:

Not much gray concrete showing anymore!  Hope to cement all of these in tomorrow.

You can see quite a bit more area filled in under her upper body and arm, too.

Here she is at the end of today.  Once again, it’s more blue and more yellow:

Quite a bit more under her tail, body and arm.  And a milestone shown in this next photo: 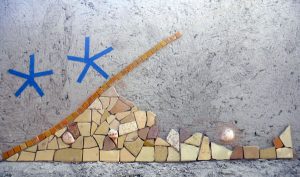 I laid in the beach/ground tile all the way out to the end!  That vertical tile marks the far right edge of the entire work.  Lots to fill in, but it’s nice to have that marker in place.

In a way it’s just “more of the same.”  But I probably put up more tile today than I have since Sirena herself went on the wall.

The best process does seem to be:

There were two passes at this today.  Here’s how she looked at lunch:

Just for comparison, here’s about that same angle at the end of the day yesterday.  Main difference is  under her tail.

And here’s what we have now, at the end of the afternoon.  It is mostly additions to the beach end, so this is an angle from there.

Next page: End of March

No big news for today, just a progress photo:

Mainly a lot of tiles that were blue-taped yesterday are glued or cemented up on the wall now.

Next page: 27 March–More Sea and Beach

The blue tile inventory being low means that I have to search a long time for each tile to try to fit into a space. What I wrote on March 18 is more and more true as I go along.

SOMEWHERE out there is that mother lode of tile from someone’s 1950’s kitchen remodel!!

But that doesn’t mean progress has stopped.  Here’s what she looked like at the end of the day yesterday:

You can see all the blue tiles added under her arm (those were still taped up previously); more of the yellow beach tiles, and a lot more filled in under her body and behind her tail.  Here are a few closeups (from yesterday and this morning): 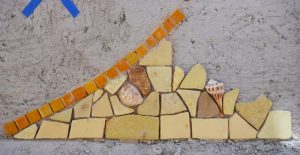 More yellow beach tile, and my first use of a pointed shell (what are those, anyway?) in the design. I’m still very curious how the grout is going to flow around those… 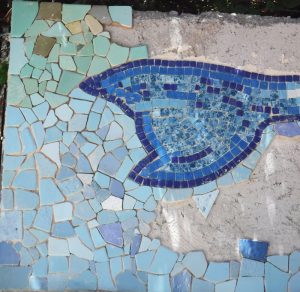 A lot more around the tailfin! Being down on the blue I’m focusing on the green.  One thing that slows me down and makes this take longer, is I’m working on the top of the wall, so I have to go all the way up and down the stepstool, usually at least three times (often more) for each tile.  Since breaking my leg three years ago taking just that many steps off a ladder, I do this very carefully each time.  It’s tiring.

Also, notice way up on top:  those tiles are going off into airspace off the top of the wall.  I may have to reinforce that from behind somehow, but we’ll see.  I’m hoping the cement (or if necessary, the No Mas Clavos) will hold them securely. 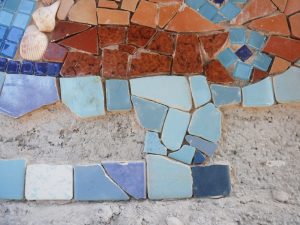 Finally, here’s a detail of that one small area under her body, connecting her waist to the bottom of the wall.  I end up using a lot of small tiles (and doing quite a bit of nipping and grinding) to make these fit.

I really am feeling the squeeze on the pastel blue tile.  I want to cut as little as possible, to try to use what I have to its best advantage.

As my inventory of tile gets smaller, it is harder and harder to find pieces that fit and mesh with what is already on the wall. Because of that, it’s not practical right now to mix up the cement, spread it out, and then choose and place the tiles.  (We keep an eye out for more beach tiles, and others are looking out for us, too.)

So instead, I’m doing what you can see in this photo:

Every piece of blue masking tape that you see is holding up one or more tiles, which I’ve selected to fit (and hopefully look good in) the space–there’s a total of about 40 up there.

Off to the right in the top photo, the two blue-tape stars show about where our two real starfish will go; they’ll give something for La Sirena to be reaching for and looking at.  (Not that starfish actually swim; call it artistic license.)

I’ll place more tiles this way until there’s enough to be able to mix up cement and glue them on.  And if I have some left over, I can work on the yellow sand area at the right; nothing very critical there and there is lots of yellow tile!